Eddy and Kuroshio Dynamics near Taiwan

This project focuses on characterizing and understanding the processes responsible for modifying the water masses of the Kuroshio as it transits northward through Luzon Strait, and East of Taiwan. Specific objectives include to (1) quantify the roles of lateral stirring and diapycnal mixingin the Kuroshio, (2) understand dynamics of high-wavenumber shear layers in the Kuroshio, in relation to internal waves and mesoscale eddies, and (3) document eddy decay and eddy-island interactions east of Taiwan. 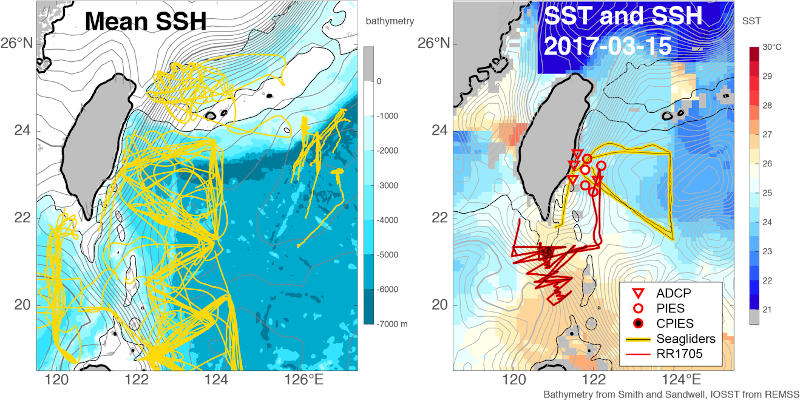 Map of historical glider tracks from the Kuroshio Experiment, OK-MC, QPE, and ITOP. (right) Map of SST from 15 March 2017 with SSH contours from the same day, with the track of sg628, which had been sampling since Dec 2016. Revelle cruise track is shown inred, and the locations of the SK-II moored array elements are depicted by the red circles and triangles.