The Monsoon Circulation of the Arabian Sea

The Arabian Sea circulation is strongly coupled with the atmospheric monsoon, but the feedback processes controlling these seasonal changes are still poorly understood. The seasonally-reversing circulation along the basin’s western boundary provides the cross-equatorial pathway for the shallow overturning circulation of the Indian Ocean, thus playing a central role in the region’s heat and salt balances. The objectives of our efforts were to better understand how local and remote forcing act to drive the seasonal evolution of upper ocean stratification and circulation in the Arabian Sea, by (1) documenting the annual cycle of stratification, watermass variability and circulation in the Arabian Sea (2) quantifying the annual cycle of exchange between the Arabian Sea and the Bay of Bengal. The autonomous observations we collect are used to characterize the generation and westward propagation of annual (and faster) Rossby waves across the Arabian Sea, and assess the relative importance of local forcing, including coastal upwelling, Ekman pumping, advection and mixing in determining the intensity and phasing of the western boundary’s response to the monsoons.

NASCar glider operations began on 18 April 2016, with the deployment of Seaglider 529 in the Northern Arabian Sea from the USNS Henson. Bragg Sherrer and colleagues graciously handled the deployment of SG529 at 15° 24’ N, after which the glider was commanded to occupy a section running south, to the Seychelles (Fig. 1). A long meridional section along 60°E crossed inflows from the Persian Gulf and Red Sea, to the Equator. After reaching the Equator, reduced flight characteristics and difficulties in navigating the strong South Equatorial Current led to the decision to turn East and recover in the Maldives. Glider was recovered on 1 December 2016 with the support from the Maldives Whale Shark Research Programme and the Maldives Meteorological Service.

Logistical and geopolitical constraints dictated that the initial round of glider operations stage from Sri Lanka and the Seychelles. We established operations from the Seychelles, including obtaining permission to conduct research within the Seychelles EEZ and local logistics support arranged by the Better Life Foundation. We consolidated equipment from multiple NASCar teams for shipping to facilitate safe, cost-effective, low-risk shipping of instruments and hazardous goods.

Two Seagliders also participated to the Mid-Basin Experiment in Winter 2017. SG133 and SG137 were deployed in 4 March 2017 and were tasked to conduct surveys around drifting fast profiling ALAMO floats (Fig. 2). The gliders surveyed for the whole lifetime of the floats 9103 and 9104, about 7 weeks. In late April 2017, one glider (SG137) was started a transit to the Maldives, going near an additional ALAMO float (9107) before the float also stopped working. The other glider (SG133) started going south, first aiming for the Seychelles, then veering for the Maldives.

SG137 came within 50 km of the northernmost atoll in the Maldives, but we were not able to secure a boat for recovery. Colleagues at INCOIS (Hyderabad, India) attempted a recovery in Indian Waters on 9 Feb 2018, but the glider was found to be heavily damaged by 10-15m wide fishing gear, some ocean trash and 1.5m bamboo stick. Glider was lost. SG133 came within 150 km of the Maldives before current reversed and it was pushed back towards the Arabian Sea interior. It stopped diving on 31 Jan 2018, and last call was on 26 Mar 2018. Both gliders dove and collected data for over 11 months, but were ultimately lost. All data was transmitted. 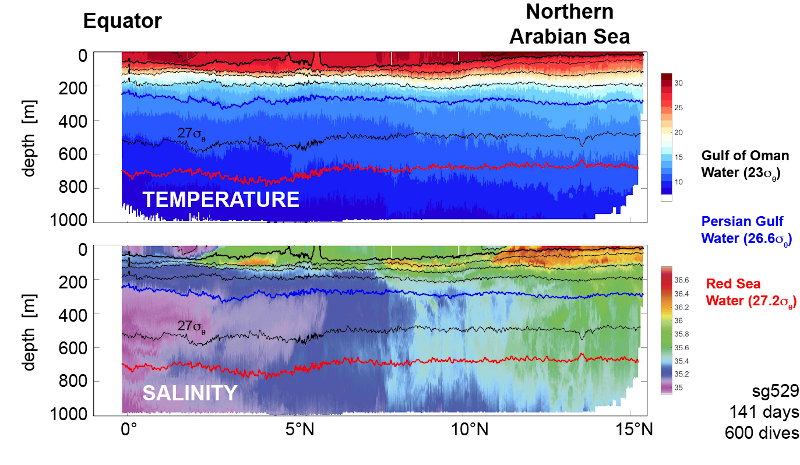 SG528 was deployed on the northern edge of the Seychelles Plateau in December 2016. The glider crossed the Equator and traveled to 5°N. After over 750 dives and 264 days, the glider became impossible to steer and it drifted eastward at the surface along the Equator for nearly 2000 km, before being spotted and recovered by a Sri Lankan fishing boat on 21 November 2017 at 0°N 78°E. During the entire time, the glider reported its position via satellite communication. On 24 November 2017, the fishing boat returned to land in Adurangola, and our collaborators at NARA went to retrieve the glider.

In January 2018, SG128 was deployed on the northern edge of the Seychelles Plateau. SG128 sampled for almost 2 months near the edge of the Seychelles Plateau, before starting a long transit to the Maldives. Unfortunately in May 2019, about 200 nautical miles west of the Maldives, the glider stopped communicating. We think it got tangled in fishing gear. Surprisingly it reappeared two months later south of Sri Lanka at the end of July, and drifted at the surface for over one month, without the ability to dive. We got regular positions until 26 August 2019, between Gaafu and Laamu Atolls (see map below).