The Monsoon Circulation of the Bay of Bengal

The Southern Bay of Bengal exhibits complex, variable circulation patterns that carry fresh water out of the Bay and salty water from the Arabian Sea into the Bay. This seasonal circulation plays a major role in Indian Ocean Circulation. Seaglider surveys allow us to understand how freshwater inflow, atmospheric forcing and the underlying mesoscale variability act to produce observed contrasts (spatial and seasonal) in upper ocean structure and sea surface temperature.

The glider missions described here were conducted as part of the ASIRI (Air-Sea Interactions in the Northern Indian Ocean), NASCar (Northern Arabian Sea Circulation-Autonomous Research) and MISO-BoB Department Research Initiatives from the Office of Naval Research 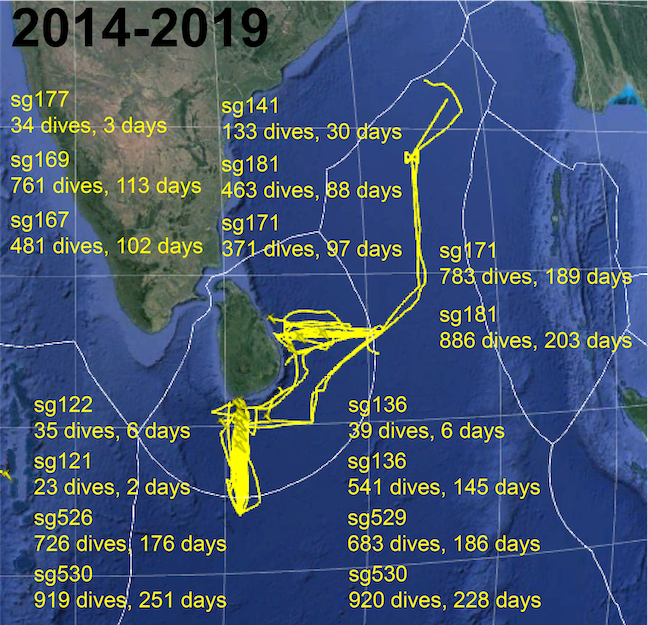 Through collaboration with Sri Lanka’s National Aquatic Resources Research and Development Agency (NARA), 8 gliders were deployed in joint operations beginning in December 2013. Fishing pressure and vessel traffic have forced an early end to some missions, and two Seagliders have been lost. One glider was destroyed when it was run down by the vessel that had deployed it, a risk of operating from chartered, local vessels. The other went missing in a manner that makes us suspect that it was caught in a fishing net (similar to a previous loss that was later recovered in the Maldives). The availability of R/V Samuddrika and its ability to accommodate foreign cruise participants has governed the tempo of Seaglider operations during this project.

Southern Line: After early difficulties getting a glider to sample the southern line (SG122 and 121), gliders were able to conduct long missions along the line extending from the southern tip of Sri Lanka to 2°N. Shortly after beginning of NASCar operation in the Arabian Sea, SG526 was deployed off the southern tip of Sri Lanka. Deployment was executed from R/V Samuddrika as part of a joint US-Sri Lanka research program, with assistance from Priynatha Jinadasa and colleagues (National Aquatic Resources Research and Development Agency (NARA), Sri Lanka). SG526 occupied occupy a repeat survey line extending southward from Sri Lanka, designed to capture the monsoonal cycle of exchange between the Arabian Sea and Bay of Bengal (Fig. 3). SG526 was recovered in October 2016, and SG530 was deployed in December 2016 to occupy the same line, followed by SG136 in August 2018. SG136 suffered a pressure sensor failure and was recovered after 8 days. SG136 was redeployed in January 2019 and occupied the southern line for 145 days. Two more missions (SG529 and 530) both lasted more than 6 and 7 months, respectively.

Including four NASCar missions, a total of six gliders missions have sampled the southern section south of Sri Lanka, along 80.5°E to provide nearly continuous coverage between April 2016 and the end of 2019. Gliders have provided roughly 75% coverage of the time period extending from April 2016 to December 2019 (900 glider-days over a period of 1200 days), collecting over 7000 profiles. These long-term observations allow us form seasonal averages, reflecting specific phases of the monsoon cycle and allowing for a quantification of variability in watermass properties and transports. 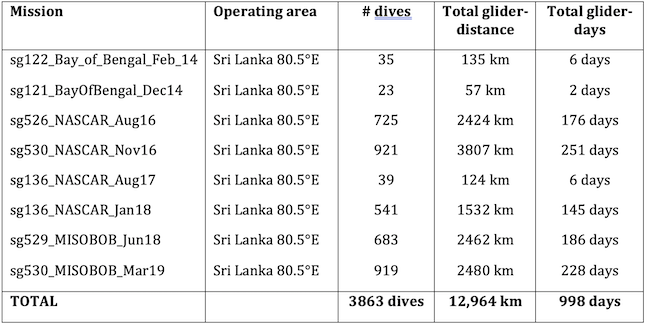 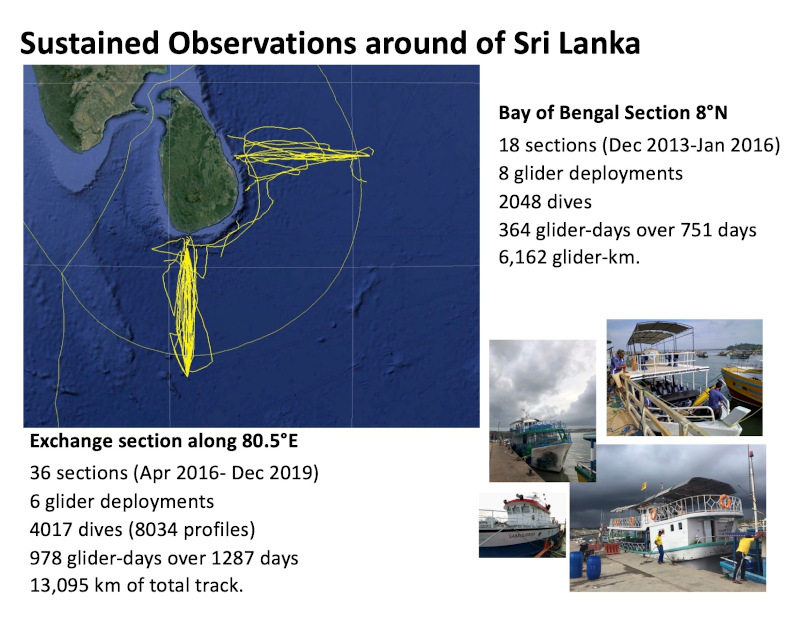 As part of the ship-supported studies in the interior of the Bay of Bengal, we also deployed 2 Seagliders during the July 2019 MISOBOB process cruise on R/V Sally Ride. These gliders, equipped with passive acoustics (to provide rain rate and wind speed estimates) and turbulence microstructure, sampled with the drifting buoys for several days, before heading to the long-term ONMI buoys. The two Seagliders then occupied a section through the central Bay of Bengal before positioning for recovery off the southern tip of Sri Lanka, completing six months of sampling. 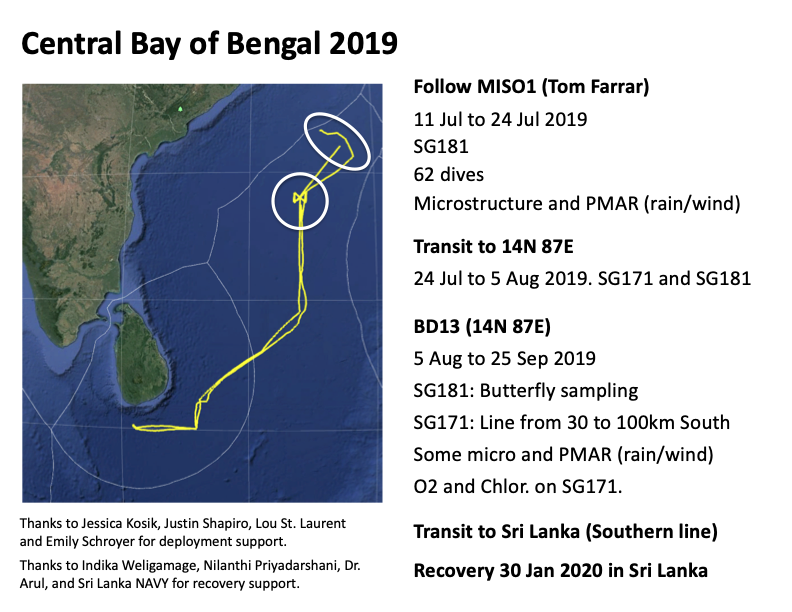